An astronaut lands on a planet of witches.
A hybrid cut-out and hand-drawn animated music video for Swiss garage rockers, Velvet Two Stripes.
CREDITS
Dave Merson Hess - Direction, Animation, Visual Development, Character Design, Compositing
Janine Waranowicz - Animation Producer, Story
Kate Renshaw-Lewis - Visual Development, Background Design, Vehicle Design
Lindsay Scanlan - FX Animation, Additional Asset Prep
Dax Norman - Animation
Peter Steineck - Character Rigging, Cutout Animation, Additional Character Design
Adam Bandrowski - Additional Asset Prep (skulls)
Song: Velvet Two Stripes: "This House Is Built On Sand" (from Sugar Honey Iced Tea)
Director's Statement
"We’d been trying to work together for quite a while, and this Summer everything finally lined up. When the band first reached out, Velvet Two Stripes referenced a video I directed for A Place To Bury Strangers in 2015. It was a noir-influenced, black-and-white piece where all of the artwork was drawn inverted. I’d made a couple projects working this way -- drawing only the light parts of each scene, in black ink on white, then inverting it, for that velvet painting effect. We decided our collaboration would use a similar approach.
I was in a sci-fi/fantasy headspace. I’d been watching a lot of 1980s scifi anime (e.g. Neo-Tokyo, Memories). And had recently finished reading through the first few years of Heavy Metal as part of my visual development research for my MFA thesis film at Calarts. Then, I watched Häxan (the Swedish silent witchcraft "documentary" from 1922) for the first time, and got excited about the idea of Velvet Two Stripes as a garage rock coven.
A pitch came together:
“Dark sci-fi, with a 1970s vibe. Some space Western elements. Bats. Alien witches performing strange rituals. A single house in the remote desert. Maybe incorporate some airbrush into the backgrounds for that scifi paperback cover illustration look.”
The band were down with the concept. My producer, Janine Waranowicz, helped take this admittedly vague pitch, tie together the various references and inspirations, and carve out a coherent narrative. I was lucky to have enough budget to get a great team together to bring the story to life.
Kate Renshaw-Lewis designed the vehicles, inside and out, and did the incredibly detailed illustrations of the universe, sand dunes and other natural elements. Lindsay Scanlan handled all sorts of hand-drawn effects animation, from the abstract, squiggly screen contents on the astronaut's ship to the copious flying bats that lend their atmosphere to the piece. Dax Norman is the most original animator I know. He handled the astronaut struggling underwater, the incredible maximum loops and skull transformation in the helmet shatter scene, and some other amazing stuff that didn’t make it into the final cut (we had too much good stuff to fit in the timeline -- not typical for animation!). Peter Steineck came aboard to animate on the astronaut and suggested taking a cutout approach to the character. His puppets, and rigging style more generally, heavily influenced the direction of the remaining, unfinished parts of the video.
Most of the static artwork started as ink on paper. If the textures look like they're airbrush, it's because they are (Golden High Flow Acrylic on bristol). Frame-by-frame animation was done partly in tech pens on paper and partly in FireAlpaca and TV Paint. Cutout animation and compositing happened in After Effects. We used a similar workflow for my last music video (Los Mundos / “Frutos Rojos”), though that was animated 100% frame-by-frame rather than being hybrid cutout.
I really loved going back to black and white. I hadn't made a full-fledged project that was drawn inverted in about four years, and it was exciting to see how much further I could take things, with the support of a band who believed in the look, and hands-on help from an exceptional team." 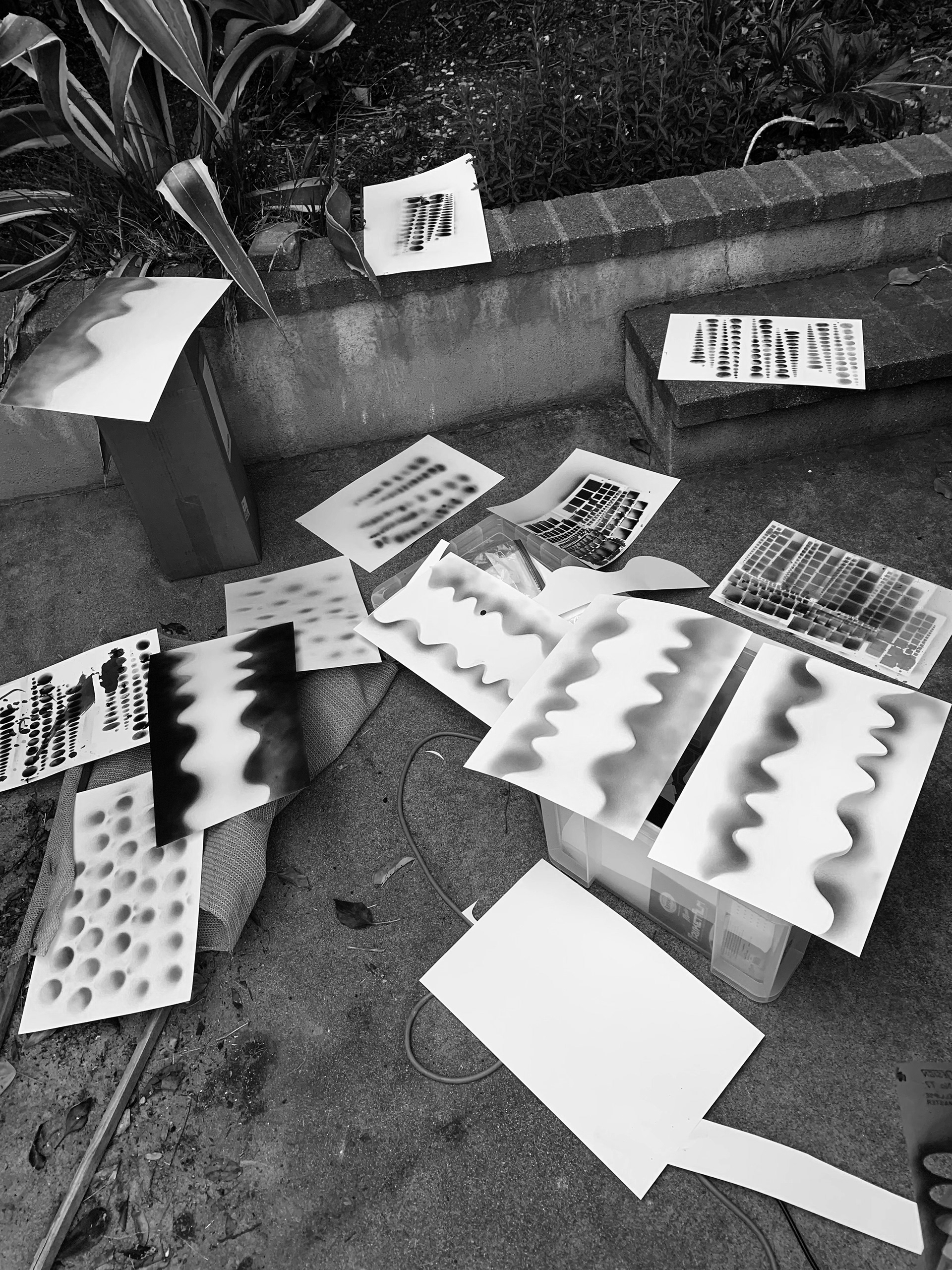 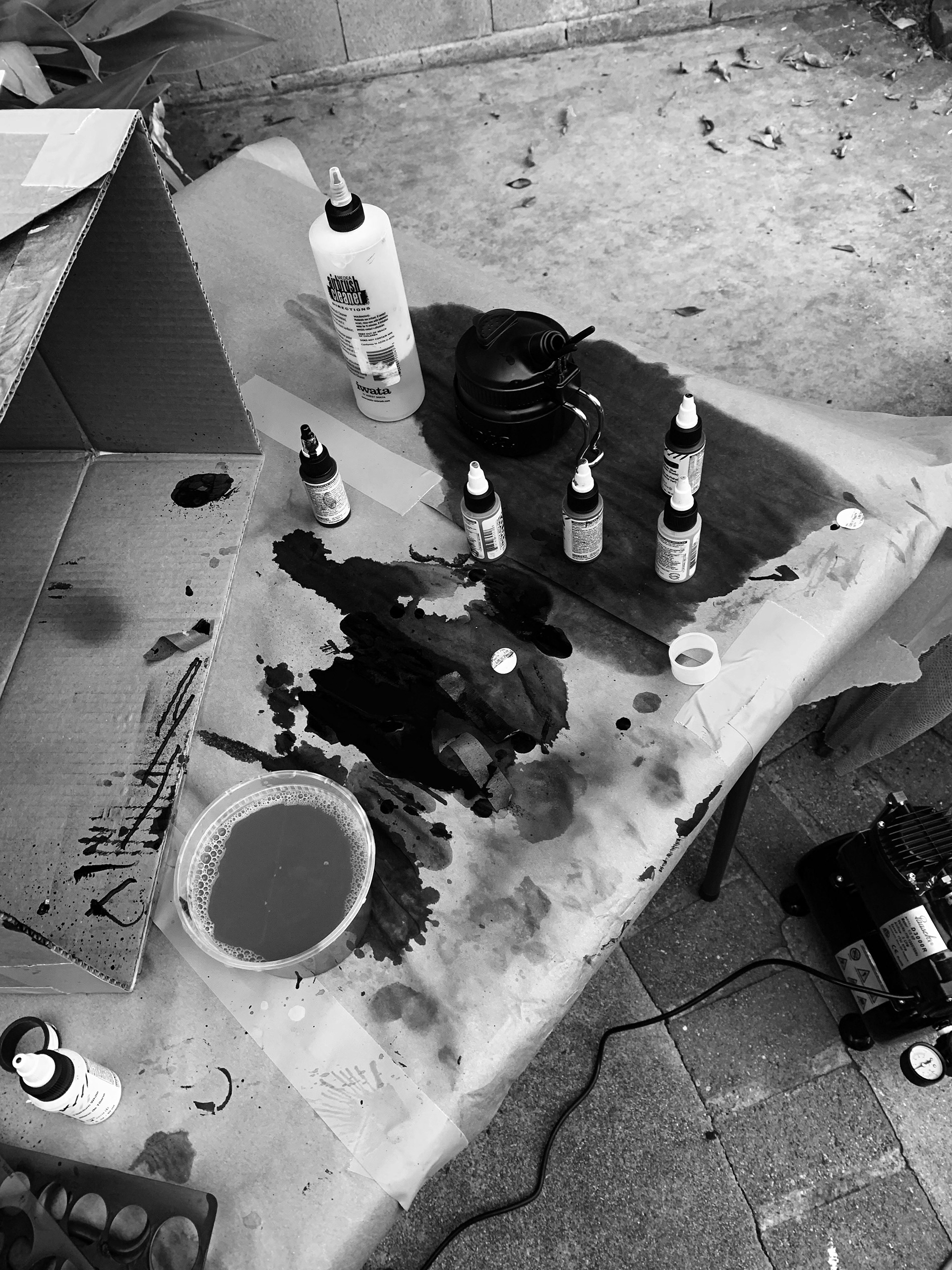 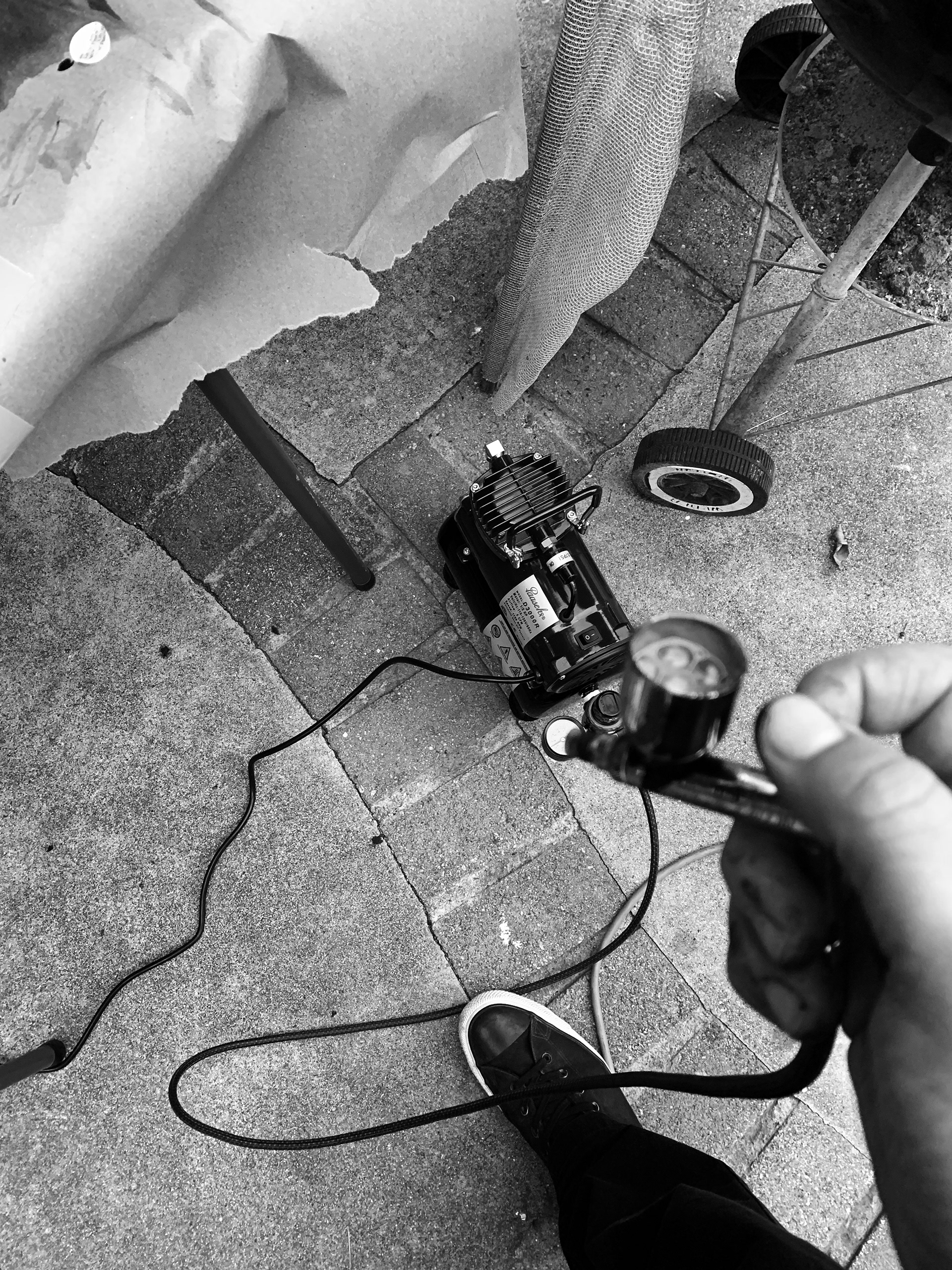 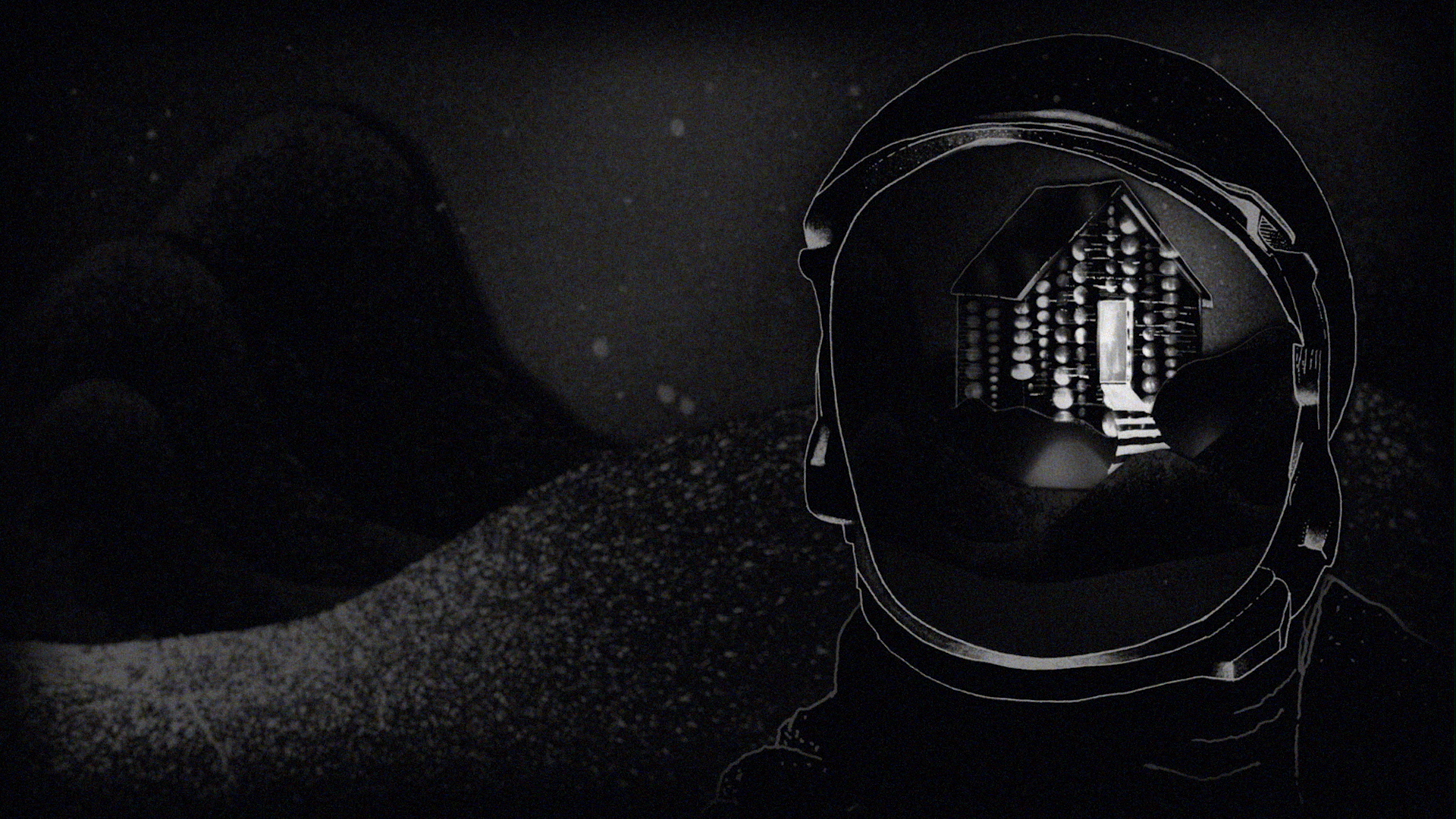 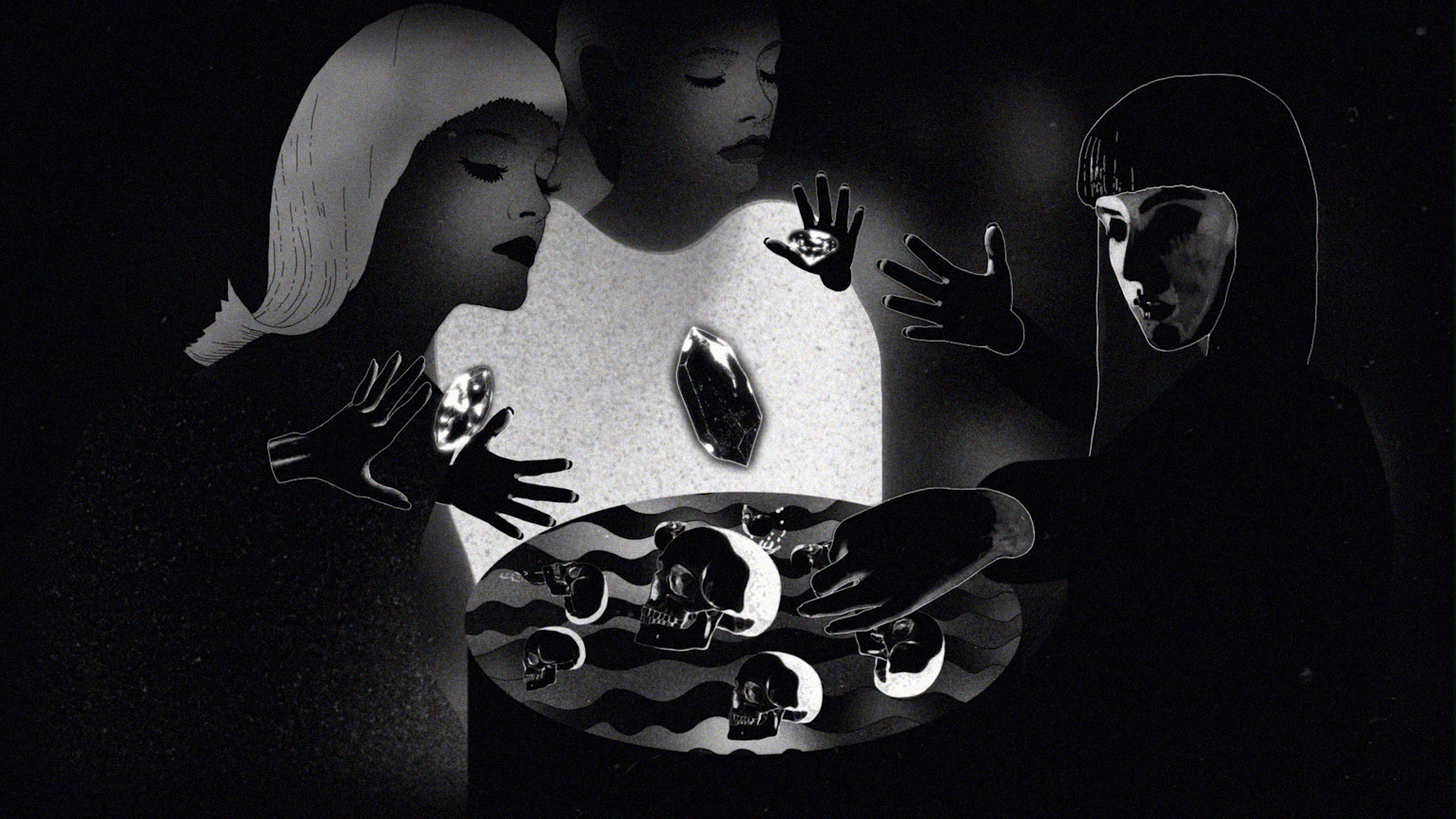 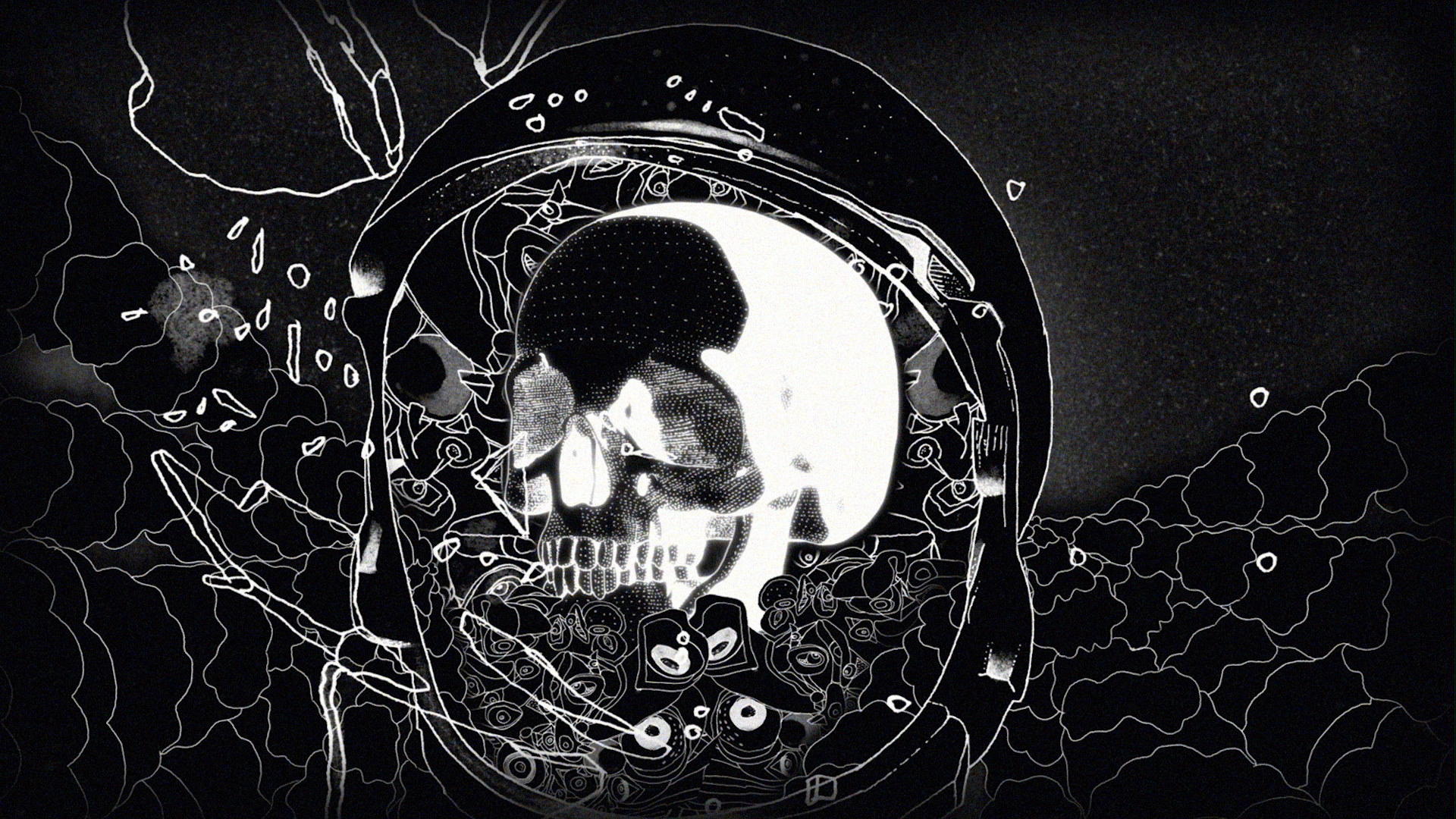 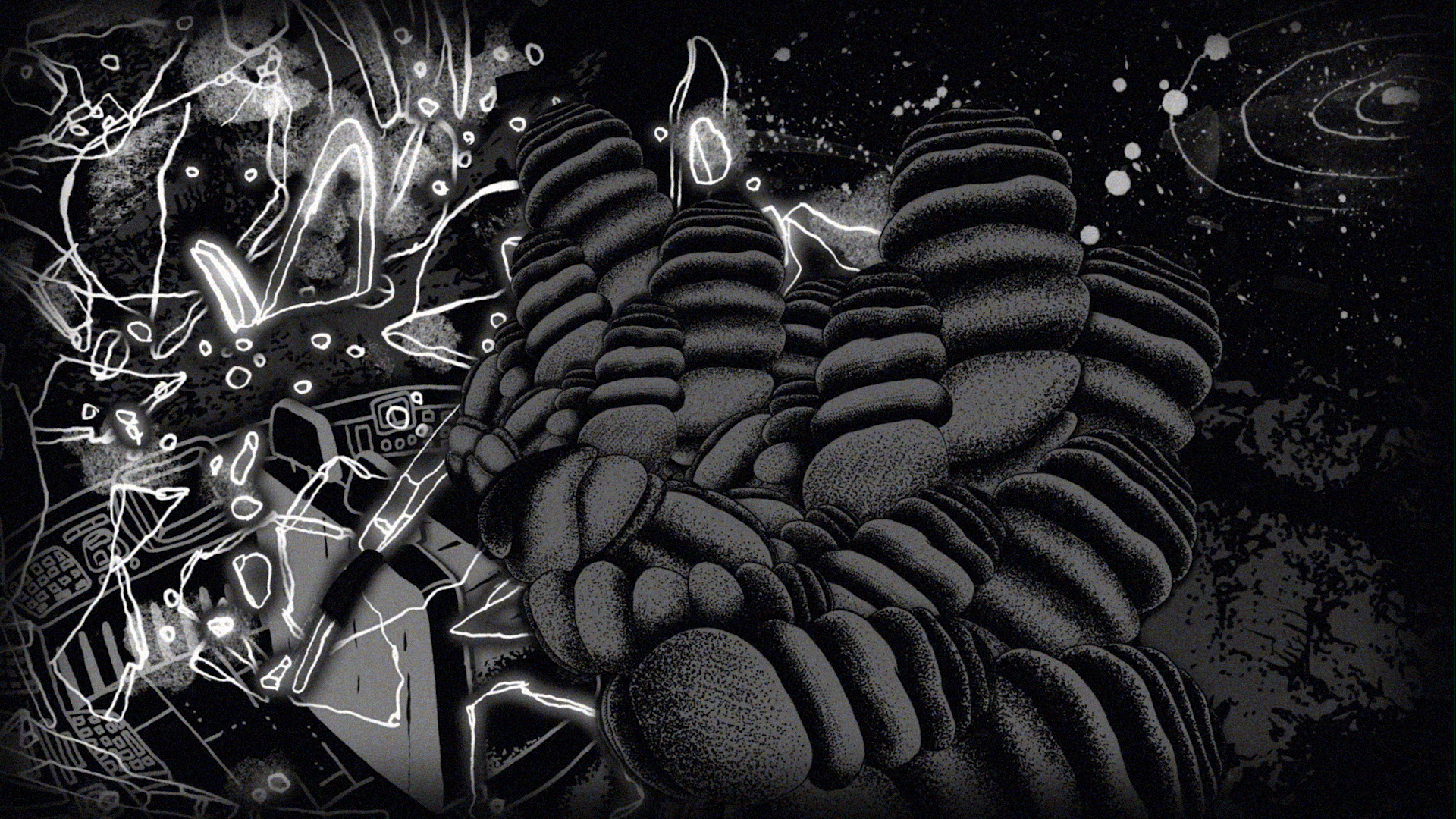